Is Handwriting Analysis a Legit Science ?    Click Here for The Straight Dope 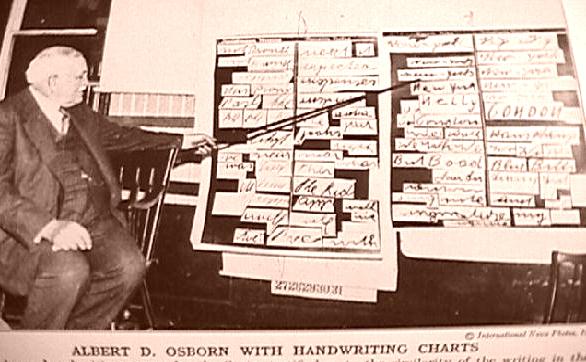 Defense attorney, Ed Reilly, never knew that Osborn had originally told the Police that Hauptmann did not write the ransom note left in the nursery.

Pressured by Police into testifying that the handwriting was the same Osborn eventually changed in his "expert" opinion AFTER  ransom money was discovered in Hauptmann's garage.

Osborn's reputation flourished due to this trial and his descendants still carry on the family business of selling their expertise in the realm of questioned document analysis.

The book was discovered to be a fake, in spite of the Osborn approval, and Irving and his wife later pleaded guilty to criminal charges in connection with the incident.

Photos above and  below were taken by Ronelle Delmont at the Trenton Police Museum in May 2001.

Hauptmann spelled "every" - "afery" yet in the ransom notes "every" is spelled correctly and is never spelled "afery". Also he spelled "not" correctly in the conceded writings.... They were looking for "similarities" and of course they were going to find them in the request writings based on how they were created...That's why the Prosecution did not tell them of their true nature. Underhanded to say the least.

According to Sisk, who was there, Schwartzkopf listened to what Mr. Osborn had to say for several minutes and then inquired as to whether further specimens would help out any, after which he remarked, "We'll send them over". He then hung up the receiver and advised those present "It doesn't look so good. He says .....and he is convinced he did not write the ransom notes.

Authorities were frustrated by Osborn's reluctance to identify Hauptmann as the ransom note writer, so they continued to request more writings from Hauptmann. Hauptmann not having slept in 24 hours declined which caused him to be hit in the ribs. This was backed up by Kloppenburg who was also writing and overheard what was happening..."I was told to write exactly as it was dictated to me, and this included writing words spelled as I was told to spell them." Kloppenburg said the same, "I had to copy it the way it was spelt" (Kennedy 179).

Special Agent Turrou recalled Hauptmann "having to work constantly at adding curlicues to "y's"...He was told to write a passage without dotting his "i's" because "i's" were not dotted in the ransom notes/ to write many capital "N's" backwards as on the ransom notes...

Most experts agreed (prior to Hauptmann's arrest) that the wording of the note was typical of an English speaking person trying to sound Germanic, rather than of a real German.

"...when Reilly launched a popular tack of the defense, inquiring into the expenses of hiring the expert witness. Restrained by the court, the witness did not tell how much he (Osborn) was being paid."

Trenchard disallows question by defense concerning the amount of money he (Osborn) would be paid for his testimony. However we know that Albert S. and Albert D. put in expense bills for $12,000 and $9,655 respectively putting the total bill for handwriting testimony up to $46,661.15, a third of the hearing's total expenditures

1. (On the night of Hauptmann's arrest) Noted similarities but many distinct differences. Refuses to make a positive connection. (Later changing his position).

2. Claimed the notes written in a disguised hand.

3. Was not told and refused to believe the request writings were dictated and written down as they appeared in the note (including style and misspellings). Actually claimed Hauptmann "reverted" back to his disguised hand when making the request writings.

4. Claimed Geissler's handwriting was similar to the JJ Faulkner deposit slip (in support of Souder's claim).

5. Claimed never to have before seen a hyphen between New and York. (Prompting Fisher to produce letters from Isidor Fisch with this same hyphen).

7. Claims Hauptmann had only one disguised hand.

8. Claims Hauptmann had a unique way of making an "x".

9. Stein contradicts this by saying Hauptmann's "x" was "a garden variety".

10. Tyrell contradicts this by admitting to Pope that the letter "x" "appeared in three different forms in the ransom letters and acknowledged writings" of Hauptmann.

11. Trenchard disallows question by defense concerning the amount of money he would be paid for his testimony.

2. Conceded on the stand there were "differences" between Hauptmann's handwriting and the ransom notes.

3. Admitted on the stand that he selected certain letters from the two sets of documents for his exhibits showing "similarities" and "discarded" others that were "dissimilar" because they happened to be another type of letter.

3. Admitted to Pope he had been "mistaken" in a forgery case (which sent a man to jail until another confessed).

4. Pope asked if the use of "may" and "packet" in the letters indicated good usage by the ransom writer - Tyrell agreed...

5. Admitted it was "significant" that the ransom writer spelled several large words correctly but misspelled smaller less difficult ones.

2. Like Tyrell, admits being struck by the many differences in the note to Hauptmann's known handwriting.

1. Refused to believe the nature in which the request writings were produced.

1. Stein admits that in his study of the handwriting specimens he had paid particular to similarities but had ignored dissimilarities.

2. Stein stated that Hauptmann writes a number of letters in a style different from that of the ransom notes, notably his "r", "l", and the ending of his "s".

3. Fisher also pointed out that Hauptmann, in the conceded handwriting specimen, had spelled "not" correctly four times.

4. Did not know the nature of the request writings.

5. Contradicts Osborn's testimony - regarding the "x" as a "garden variety".

6. Testified that the ransom note writer used a more vertical hand then Hauptmann's.

1. Previously stated that there was an attempt at disguise in the ransom letters.

2. Later stated the range of variation in the ransom notes is within the scope of variation demonstrated by Hauptmann in the request and conceded writings.

3. HCD 1-17-35: Rosencrans had Walters copy the word "two" as it appears in Hauptmann's conceded writings. He produced a copy that showed a "strong similarity", despite his protest that he was a poor imitator. Then Rosencrans forced from the expert an opinion that a person familiar with German characters could probably have been even more successful in the imitation.

"I am going on faith," said Cassidy. "I have got a certain amount of faith in humanity and I just can't think those officers would do a trick like that."

Osborne Jr. echoed him. "I cannot believe that the people getting those specimens would do anything like that."

The jury didn't believe it either. And yet that is what had happened...

Trendley: "I wouldn't take anything written in a police station, you would spell what they told you to spell. Trendley added that the word expenses, when examined under the microscope, appeared to have been written over....worked over."

The differences between the ransom writing and Hauptmann's writings which have
been pointed out in this report are very prominent and , I submit, far
outweigh occasional similarities to which the reader's attention has been
drawn.

In my view it would have been impossible for Hauptmann to write as the writer
of the ransom notes did, or vice-versa.

Some of the differences I have found in comparing Hauptmann's writings with
the ransom note writings have bben quite startling. Hauptmann's use of the
letter "d" for instance is quite unlike anything in the ransom notes; for not
only does he frequently end the letter with a downstroke well below the line,
but the line becomes thinner instead of showing pressure which is more normal.
Differences in the figure "o". the capitals "B" and "S" and the small "k" are
equally startling.

I conclude this summary by re-affirming my opinion that the ransom letters
were not written by Hauptmann.

(Published conclusions of) American handwriting expert, Mr. Gus R. Lesnevich,
formerly a documents examiner in the US army and US Secret Service....

bob mills for the whole forum crowd
germans, or americans who speak that way
Sat Dec 7  2002

I've kept silent on the handwriting debate, because I know nothing about graphology, and don't want to sound foolish. But a key question, and possibly the key to determining Hauptmann's guilt or innocence as a kidnapper/murderer, is "Did a German write them, or an American trying to sound like a German?"

I refer everyone to the bandleader from NORTH DAKOTA, Lawrence Welk, who was such a beloved AMERICAN that they tried to build a taxpayer-funded memorial to him up there.

Welk never lived in Germany in his life. Yet at age 65, he was still saying things on TV like "Tank you, tank you frentz-um-um" and "Dere dey are, de luffly dancing couple, Bobby unt Barbara. Wunnerful, wunnerful."

The point is, Welk knew how to speak unaccented English. But he didn't want to do so, maybe because he thought speaking with a German accent made him sound more like Wagner...or Mozart. But there's no evidence that Welk ever WROTE THAT WAY. I've never seen a sample of his writing, but I'll bet anything it isn't filled with "Tank yous" and "Dere dey ares."

If one speaks with a German dialect, but has become accustomed to writing in English (unlike Welk, Hauptmann was born in Germany, but he'd been in the United States for almost ten years in 1932), would he naturally translate idiomatic German speech into writing? I doubt it. He might SAY "anyding," but would he write it that way? Or would he write "anything," but pronounce it "anyding?"

Just asking. Oh, by the way, would somebody "Plees-a turn off da bubble machine?"