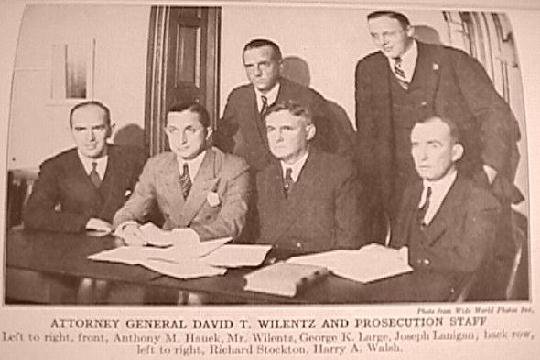 The Prosecution Team consisted of five men -  Anthony Hauck, Jr., Joseph Lanigan, Robert Peacock, and George K. Large. but only one man took all of the glory. David T. Wilentz the Attorney General of New Jersey.

Wilentz,  a Democratic foe of Republican Gov. Harold G. Hoffman, built his reputation upon the sensationalism and "success" of this horrendous trial.

Wilentz and his assistants gathered lots of questionable "evidence" against Hauptmann.  The Attorney General is pictured below with samples of handwriting  his team used against the defendant.    The "expert" witness on handwriting, would later be exposed for having made horrendous misjudgments such as the Howard Hughes fiasco.

One look at the time sheets from the Reliance Management with blobs of ink over the check marks,  indicating Hauptmann told the truth when he claimed to have been working on March 1 and April 2, would make anyone skeptical of the integrity of this prosecution team.

Never were these lawyers required by law to reveal any part of their case to defense attorney, Edward Reilly.    Without "rules of discovery" in court proceedings of that day Wilentz was able to get away with "murder." He would later be known to Jerseyites as "the Pope of Perth Amboy"  because of his powerful grip on the politics of his state. There is no question that his popularity and power stemmed from this trial. The only question that remains is - did David Wilentz put his own aspirations ABOVE any concern for a FAIR trial?

David Wilentz' son, Robert Wilentz, was the Chief Justice of the New Jersey State Supreme Court  from 1979 until his death in 1996.

(a note: David Wilentz' daughter was married to Leon Hess - owner of the NY Jets and all those gas stations.)

It was at the height of Robert Wilentz's tenure as Chief Justice that Anna Hauptmann and her attorney, Robert Bryan, were denied a reopening of the case. Even though the appeal was made in Federal Court, (not New Jersey Supreme Court), the opportunity for such a major familial connection in squelching Hauptmann's exoneration, is quite probable.

Much of Bryan's appeal had been based on new evidence revealed by New York  Post investigative reporter, Anthony Scaduto. Other researchers, using the Freedom of Information Act to uncover the misdeeds of Wilentz and his team have also realized the probability that a frameup took place.

For Anna Hauptmann that denial to review her husband's case must have felt like a second execution of her husband. When the appeal was denied, NJ Gov. Florio, not wanting to repeat the mistakes of Mass. Governor Dukakis (who risked his political career by exonerating Sacco and Vanzetti), told the elderly widow that history will have to be the judge. Anna died waiting for history.

for his intellectual depth and athletic life, died on March 6 at the age of 92.

Fisher died of pneumonia at Mountainside Hospital in Montclair. He had lived

in Upper Montclair and on his farm in Allamuchy.

His death came 11 days after that of firm co-founder Bernard Shanley, who

In many ways, Shanley and Fisher were opposite. Where Shanley was the

of staff, Fisher was quiet and academic, content to pore through the law books

in search of a fresh angle on a tough problem.

"He loved the intricacies of the law," says Shanley & Fisher's managing

partner, John Kandravy. "The more challenging the issue, the more exciting it

Nor was Fisher too proud to take second seat in a big case, as in the 1935

Wilentz as a special assistant in the trial of Bruno Hauptmann.

Called the "forgotten man" in the case, Fisher was an integral

conviction.   Throughout his career, in fact, Fisher worked on special assignment. While

aide to Circuit Court Judge Joseph Smith in Newark, Fisher was plucked in 1941

from private practice by Gov. Charles Edison to investigate the State Highway

Department. Edison called on him again two years later for another special

probe, this one into the Civil Service Department.

And in 1954, Gov. Robert Meyner appointed Fisher to investigate the

[This investigation is what led to the downfall and death of Gov Harold G Hoffman- the man who tried, but failed, to save Hauptmann from an unjust execution in 1935.]

part of the 20th Century, settling in Tennent in Manalapan Township, Monmouth

County, in 1913. [Amazing that Fisher, like Wilentz, had no sympathy for the plight of Hauptmann who was being persecuted for his foreign-ness!]

Upon arriving in this country, the family changed its name from Balikian,

which translates into English as "son of a fisherman," t Fisher.

Intensely proud of his ethnic heritage, Fisher never lost an opportunity to

remind his colleagues of his Armenian background, Kandravy says

Columbia Law School, from which he graduated.   From 1928 to 1933, Fisher worked as a special assistant prosecutor to Joseph

IN 1946, Fisher joined Young, Shanley & Foehl, to which Fisher's name was

Outside of the law, Fisher enjoyed painting landscapes in watercolor. His

farm in Allamuchy. Fisher also was "an incredible hiker," she says, climbing

the Matterhorn at the age of 67. She says Fisher also was an avid gardener.

Fisher retired as an active partner in the firm in January 1975. Kandravy

disagree on what the effect could be.

Some trustees say the relationship will smooth relations between the two

institutions -- the courts and the Bar -- while others say the relationship

Wilentz says Dileo is a hard-working, dedicated lawyer, with whom he has had

"a long and close and wonderful relationship." When it comes to bench-Bar

relationships, "Matt is a man of high integrity. There is no doubt in my mind

that his loyalty to the Bar is strong, and he will be absolutely independent of

any friendship he has had with me." Wilentz says he would be independent of

Dileo adds, "We had a great working relationship, but we didn't always

agree." The relationship will not have an effect, he says.

Other issues face the new president. He says he wants to improve the

organization's lobbying efforts, and wants to increase the number of members in

by addiction to alcohol and drugs. The board of trustees recently approved a

counseling and other help for lawyers with chemical dependencies. Help would be

Like his recent predecessors, Dileo has a special theme for his presidency

Outgoing president Alan Pogarsky's theme was "Quality of Life," and during

Pogarsky's tenure, the Bar undertook studies or whether lawyers were

dissatisfied with their professional existence, and how the quality of their

lives could be improved.

Dileo's theme is "Professionalism," a one-word slogan that represents Dileo's

desire to undertake initiatives to improve the image of attorneys.

"I think attorneys get a bad rap from the media, the commentators, reporters

-- the whole business of lawyer bashing," Dileo says. The problem stems from a

disasters or misappropriate funds, he says. He will appoint a

"professionalism" committee to look into the problem from two angles, improving

the image and improving the lawyers.

"I think it's all a perception problem, and I want to do something about the

perception," he says. "I want to do it two ways, by educating the public about

who we are and what we do . . . and by increasing our awareness and enhancing

He adds: "I think lawyers get a bad rap, but because of the perception that

to a higher standard of conduct."

Dileo, who grew up in the predominantly Italian Chambersburg section of

Trenton, says his boyhood ambition was to be a lawyer, and after World War II he

went to Rutgers and Rutgers Law School on the GI Bill. He says his hiring by

the Wilentz firm was a case of being in the right place at the right time.

In 1953, the firm had an opening because a pregnant associate left, and the

Dileo for the job.

When Dileo started, the firm had eight lawyers -- including three Wilentzes

and a Wilentz brother-in-law, George Goldman. There was David Wilentz, the

Hauptmann; Warren, David's eldest son; and Robert, who was a year out of

In those days before specialization, lawyers did everything. "I had a very

For the next year, though, he won't be practicing much law. The firm will

get 40 percent of his time -- half lawyering, half managing. The rest of his

hours will be spent down the road at the Law Center.

of the State Bar Association, is an old hand at running big enterprises. He is

managing partner of one of the state's largest firms, Wilentz, Goldman &